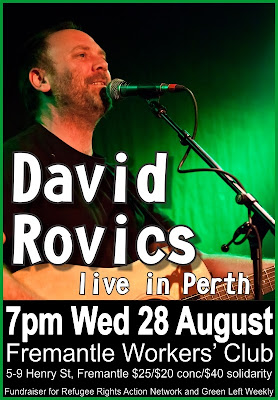 Progressive US singer/songwriter David Rovics will be performing a special gig in Perth on August 28 as a fundraiser for Refugee Rights Action Network and Green Left Weekly.
7pm Wed 28 August

David has been playing “songs of social significance” for more than two decades including a very strong focus of supporting anti-racist causes. He is a fierce critic of Western governments throwing their weight around the world and is a strong supporter of liberation for Palestine.

This video is of a song about the wall Israel is building to divide Palestine applied to the wall being built along the US-Mexican border to keep Latin American’s out of the US. He also wrote the song “No One Is Illegal” which features in the video about RRAN’s Northam convergence this year.

Sugarchild are the bastard children of Gillian Welch and the Counting Crows, playing sad yet foot-tapping songs about life, love and society.

Last time David was in Perth: