The refugee experience is a lottery from start to finish. People seeking asylum do not know what is going to happen to them. They often don’t know from one day to the next if they are going to survive or loose a loved one.

The Border Farce Refugee Lottery is a sarcastic play on words. In Australia the fate of a person seeking asylum is determined by Australian law and policy, enforced by the Australian Department of Immigration and the Australian Border Force. The process is a farce. It has little to do with determining who is genuinely in need of asylum. It is about enforcing and enacting a punitive and cruel system that seeks to deter  people who are entitled to seek asylum, or to deny them asylum if they have not been deterred.

The justifications used shift and change according to the political climate and needs of government. The justification in favour at the moment is that the polices are about saving lives at sea. This is lie. This is a deception that seeks to make a virtue of an immoral policy. It’s seeks to disguise and obscure the real reasons for Australia’s policies.

The government boasts that they have stopped the boats.  They boast the Navy, the Department of Immigration, Border Force and the Federal Police have implemented a ‘border protection’ system that has been able to detect and turn back almost every single person who seeks asylum by boat.

The truth is brutal and ugly. The truth is that prompt and effective rescue at sea is inconsistent with the primary goal of Australian ‘border protection’ policies, that is to deter people from seeking asylum. The truth is that on many occasions this deter and deny objective was placed well above the legal obligation to save lived at sea, and people drowned as a consequence. In one case even where they had been calling for assistance for two days.

As a part of our Border Farce Refugee Lottery project RRAN has produced ‘lottery tickets’, which when opened show one of several possible outcomes for people who seek asylum in Australia. These tickets were handed out at the Fremantle Safe Harbour refugee week protest on the 25th of June, 2016 accompanied by a ‘refugee boat’ that RRAN activists constructed and took on the protest march. 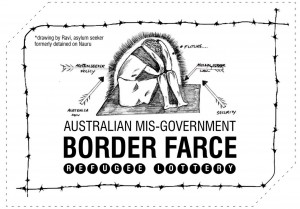 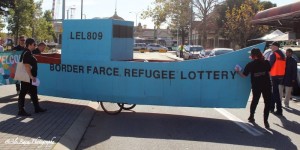 The outcomes are all based on real-life examples.  They are …