The Refugee Rights Action Network joined other activists from all around the country, this Easter weekend in Darwin – a place which has progressively become the detention capital of Australia. Activists from Perth, Melbourne, Brisbane and Sydney were among those attending, this included three ex-detainees – three men from Iraq, Afghanistan and Sri Lanka who joined the convergence to speak out against mandatory detention.

On the first day of the convergence 135 people congregated at parliament gardens to hear an array of speeches in support of refugee rights. Aboriginal rights activist and local indigenous woman, June Mills, was among the speakers initiating the day with a welcome to country on behalf of the larrakia people – the local indigenous community.

The speeches were followed by a march through the city to the Department of Immigration offices where an emotional speech was delivered by Perth’s Refugee Rights Action Network’s, Marcus Hampson. The contingent then marched to the church grounds and were addressed by Hadi Housseini, an Afghan teenager, who had previously been in detention. 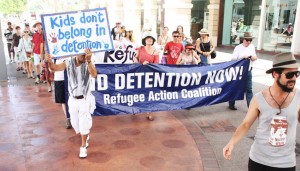 The convergence then travelled to Darwin Airport Lodge, a detention facility used to detain mostly families and minors. The convergence approached the fence and started to yell over the fence and people on the other side came out of their rooms and stood on their balconies and approached the perimeter fencing. Men, women and children communicated to the protesters on the outside despite the heavy presence from guards and police.

It was a confronting experience to try and talk to people through tall fencing, mesh and plastic making it hard to visibly see each other this was further exacerbated by the constant presence and vigilance from police and Serco. People on the inside attempted to pass notes over the top but they were intercepted by the police on the outside whilst the people on the inside were reprimanded by Serco guards. However, there was a perseverance on both sides of the fence to communicate and so many notes passed too and fro that eventually the police and Serco relented.

Parents put their toddlers on their shoulders and they were able to see above the fence, one played with a protesters son also sitting upon his father’s shoulders. Many of the people inside had been detained for over a year, including unaccompanied minors from the age of 10. This was revealed through communications and through the following notes passed through the fence: 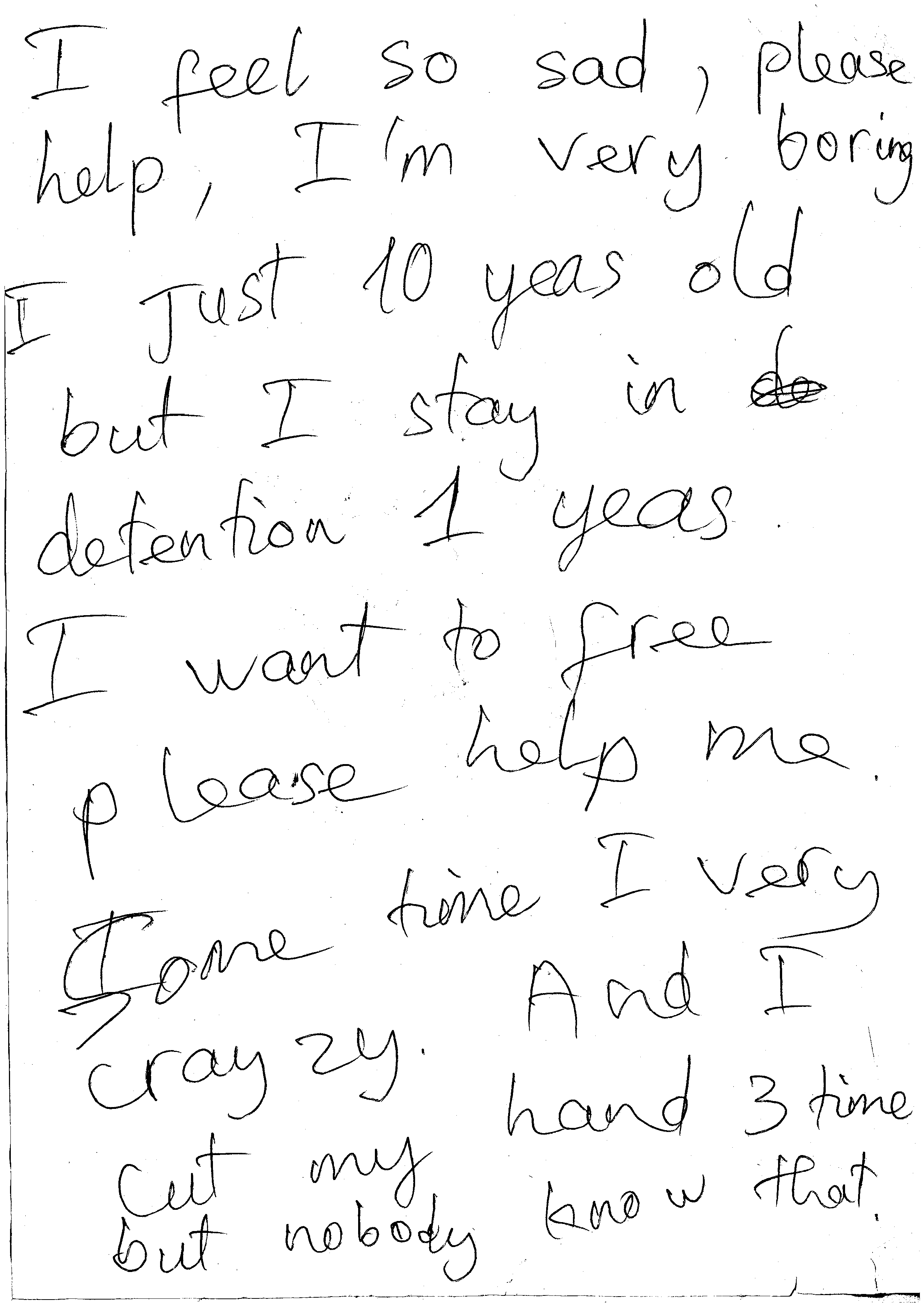 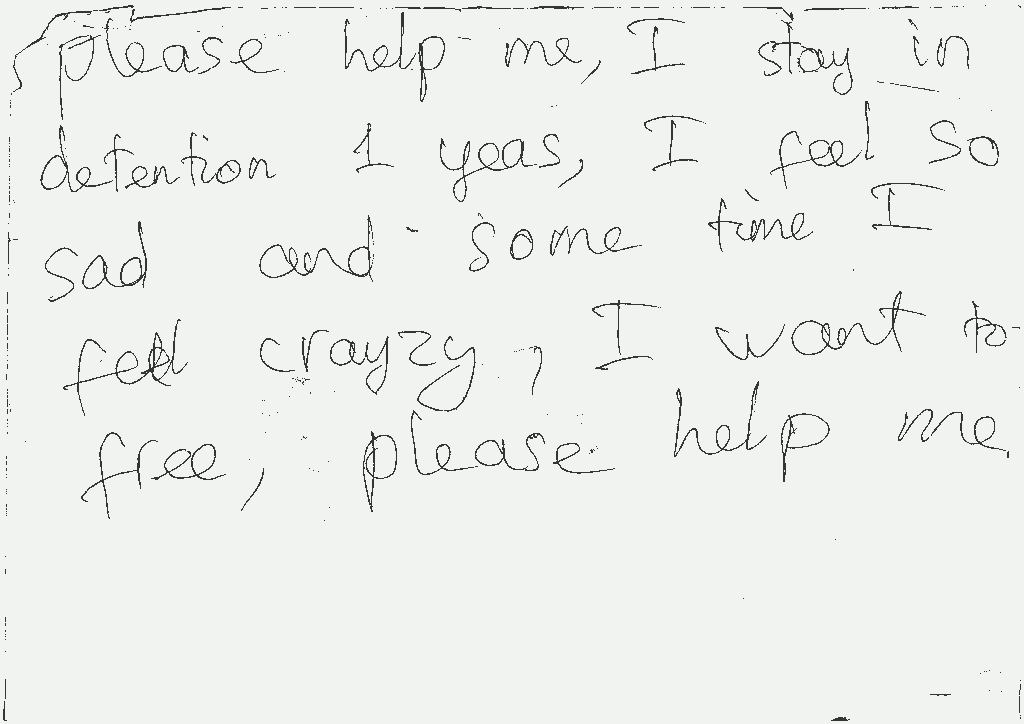 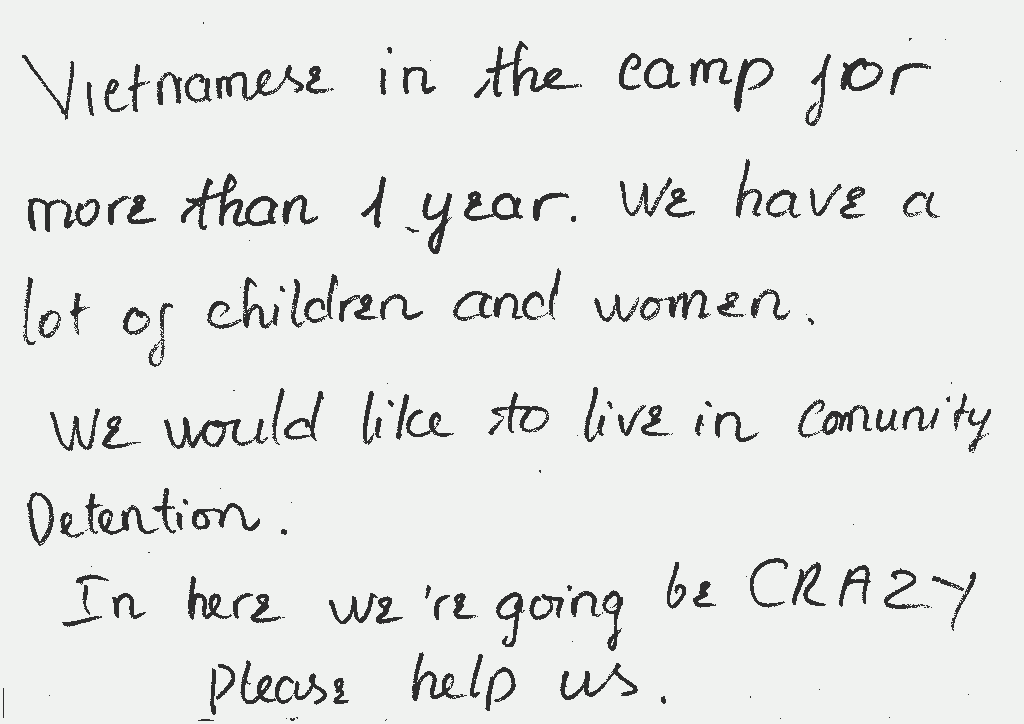 The following day the convergence travelled to Northern Immigration Detention Centre (NIDC) and marched around the perimeter to congregate at one point of the fence and chanted over the top.

Responses were limited, it was incredibly hard to see into the centre as it is contained within double perimeter fences and large shrubbery and trees. There were Serco guards patrolling inside the inner perimeter fence, a private security company patrolling the outer ring of fencing and the Northern Territory police stationed on the outside of the fences.

A protester scaled the fence and was able to sight men waving from within the centre – the heightened elevation of the tree the only position which achieved visibility into the centre.

Asylum seekers were told that any indication of protest — ‘even if you jump up or wave your hands’ — that their files would be sent to the Federal Police. They were also told that planned moves out of the detention would be indefinitely stalled if they took part in any protest activity.

On the third day of the convergence protesters travelled to Wickham Point, one of Darwin’s most remote centres. The contingent was halted at the perimeter of the land under the pretence that it was private property, this was at such a distance that the centre was not even within visibility or earshot.

The Police lined the boom-gate at the entrance to the road that leads to the centre. After discussion the protesters decided to walk to the left of the boom-gate and around a fence to scale a hill to get within eye-sight of the centre in the hopes of letting those inside know that they were there. As the protesters began to scale the hill the police followed and initiated a chase. 7 activists were arrested at the top of the hill but were later released.

Many successes were achieved through the convergence, foremost, the people suffering inside detention knowing that there are people on the outside who support them and who are adamantly opposed to mandatory detention, the exposure of asylum seeker stories within detention, further exposure of the self-harm epidemic that is an inherent product of detention – in children as young as 10 – and media coverage of the issue to keep it at the forefront and attention of the public and on the conscience of all those who are cogs in its existence.