Forum on Mandatory Detention: How it began, how we can end it Urgent Action Needed to Prevent Tamil Deportation

“The Australian border security system has lost its moral compass.” 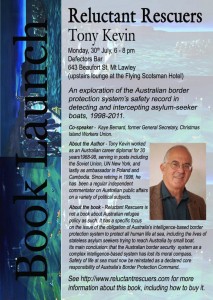 In recent years, time-hallowed rescue-at-sea obligations have been constrained and corroded by an increasingly ruthless and cynical Australian maritime border security system. This system routinely collects large amount of human and signals intelligence on boats that may be on their way towards Australia’s territorial waters. But it sometimes declines to acknowledge and act on that intelligence when it indicates the possibility of a ‘suspected irregular entry vessel’ – a SIEV – in peril at sea.

In five major separate boat sinkings or disappearances since SIEV X in 2001, more than 400 asylum seekers bound for Australia have been lost at sea. In “Reluctant Rescuers,” Tony Kevin forensically examines what can be learned from exploring the public record on the four more recent tragedies in 2009-2011.

His main conclusion: that the Australian border security system has lost its moral compass. Safety of life at sea must now be reinstated as a declared core responsibility of the system.

(For more information about the book, see reluctantrescuers.com)