Nauru: Another Protest, Another Suicide Attempt, and now Internet Censorship

Yesterday, a banner saying “we are not criminals” was hung on the detention camp fence but was confiscated by the Salvation Army yesterday, (Saturday 27th). The asylum seekers were told they would have to make a request to Immigration if they wanted their banner returned.

The detainees have responded to the heavy-handed treatment, with a united mass protest this afternoon, with more banners saying: “Nauru, the same as Guantanomo”; “Close Nauru”; “Freedom” and others.

The detainees are also angry and distressed that their access to the Internet has been restricted to a 15 minute session. They are now supervised to make sure that the asylum seekers are not trying to contact the media.

They are also concerned that they will be restricted from updating their Facebook page which has been a source of information and appeals to the international media and human rights organizations.

A caller from Nauru also confirmed that on Saturday night (27 October), an Iranian man made his second attempt to suicide in a week. The Refugee Action Coalition was told he was again rescued, but subsequent to his suicide attempt, his distressed calls could be heard across the camp until 3.00am Sunday morning.

“We are again calling for independent human rights monitors to be stationed on Nauru”, said Ian Rintoul, spokesperson for the Refugee Action Coalition, “Asylum seekers are not criminals. The idea that their right to communicate to the outside world could be restricted and censored is unconscionable.

“The Department of Immigration is going to extraordinary lengths to prevent the truth getting out of Nauru. But the truth is obvious – Nauru is a prison for refugees, and the government of both Australia and Nauru are denying asylum seekers their human rights and their rights as asylum seekers.

“Nauru must be closed and processing for all those held in limbo in both Australia and Nauru must begin immediately.”

Attached is the first photo of asylum seekers in the detention camp, taken Sunday morning, 27 October. 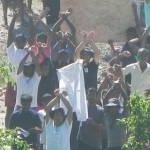 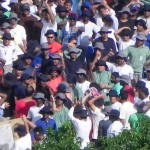 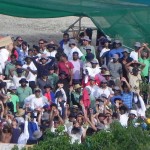 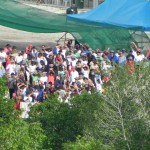 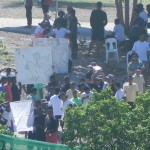 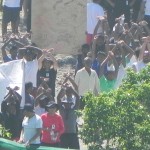 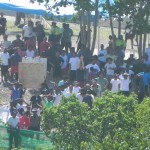 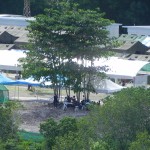