The People Smuggler: An evening with Robin de Crespigny Hell on Nauru: shut it down

Protest Geert Wilders in Perth: No to racism, no to Islamophobia 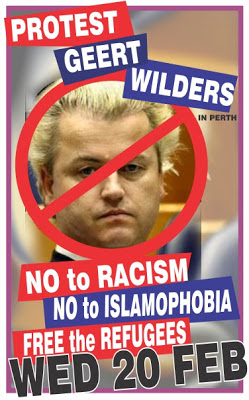 PERTH: Wed 20 February
Venue and time to be confirmed

***We understand that the location of Wilders’ speech will be kept secret until shortly before the event. His supporters claim that this is for his safety, but in reality it is because he is scared that anti-racists will outnumber his racist supporters. Please add yourself to this event to get updates as we know more details***

Refugee Rights Action Network in Perth is calling all anti-racists to support a protest outside the speech by Dutch fascist, Geert Wilders.

Wilders is the founder and leader of the Dutch Party for Freedom (PVV), and campaigns against what he calls the “Islamisation of the Netherlands”.

Wilders will be using this visit to spread his message of hate and intolerance. His views on immigration and Islam, including ending all immigration from Muslim countries and a 1000 euro licence to wear the hijab (which he called a “rag head tax”), contribute to the hysterical anti-Muslim climate generated by the War on Terror.

Politicians and the mainstream media have promoted both Islamophobia and wider xenophobic attitudes. They will inevitably give Geert Wilders saturation coverage when he arrives, helping to legitimise his abhorrent ideas.

We believe there needs to be a large, broadly-based show of opposition to Geert Wilders through a peaceful protest outside every appearance he makes in Australia. This is one of the few ways to ensure that he does not go unchallenged, and will make it harder for the media and right-wing figures to pretend he is raising issues that are in any way legitimate.

We have a responsibility to see that Wilders’ views do not pass unchallenged. Public protests make it clear that anti-racists will have our views heard. We ask all anti-racists to support and attend protests wherever he is organised to appear.

[This protest was initiated by Refugee Rights Action Network. Other groups are welcome to promote and endorse the protest.]

Click here to put your name on an SMS alert list for details as they emerge about the Wilders protest venue and time.