Hell on Nauru: shut it down Refugee Rights convergence to Northam detention centre 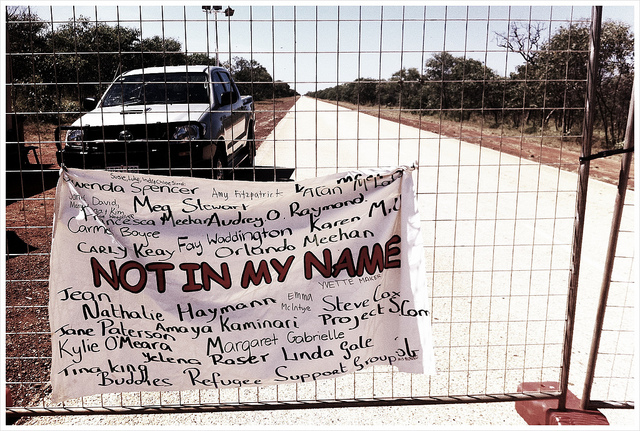 Refugee rights groups from around the country will be converging on the Yongah Hill Detention Centre this ANZAC Day long weekend to protest against the mandatory detention of asylum seekers.

We have seen politicians engage in a race to the bottom in refugee policy. With the re-introduction of offshore processing and the situation in Nauru and Manus Island becoming increasingly worse, now is the time to publicly condemn this abhorrent policy. To do this, the Refugee Rights Action Network (RRAN) will be returning to Northam’s detention centre to expose the cruelty and challenge the lies about our immigration detention system, and to show solidarity with the refugees and asylum seekers protesting in detention. If you are interested in joining the trip, you can register at http://refugee-rights.net/converge.

And even if you can’t make it out to Yongah Hill this ANZAC Day long weekend, you can still fight for the rights of refugees imprisoned in Australia’s immigration detention centres. Read on and support!

NOT IN OUR NAMES Project

If you can’t go to Yongah Hill, but want to contribute and state your opposition to this policy of violence against refugees and asylum seekers you can contribute to the NOT IN OUR NAMES banner. This banner will feature your name along with other contributors and will travel with RRAN activists to Northam and be displayed against the backdrop of the detention centre.

For the price of a ticket on the bus — your choice of $25 unwaged, $40 waged or $100 solidarity — you get your name on the banner and the knowledge that you have funded one more seat on that bus. You will also receive a photograph of the banner and RRAN in action.

For $200 you can SPONSOR AN ACTIVIST who will write a public account of their experiences and what they witnessed at Yongah Hill along with a private letter to you. These funds will go to the overall costs of RRAN’s operations, not to the activist themselves. But the funds will allow your particular RRANer to go where journalists don’t, to visit in detention and to organise further actions upon their return. And, you will also get your name on the NOT IN OUR NAMES banner and the photograph.

Donations can be made at http://refugee-rights.net/converge/register/ — just fill out the form there and put ‘Sponsor an Activist’ in the comments box.  Thanks!