“They are economic migrants”

You hear this one a lot – that people who take the dangerous boat journey to Australia in order to claim asylum are ‘economic migrants’.

Politicians on both side of the house love this argument. It insinuates that people are being selfish, greedy and dishonest. It feeds into and justifies resentment of asylum seekers. It denies the reality that leads people to flee to Australia. It makes it okay to send people back to the arms of their persecutors. It is illogical and completely absurd.

The main absurdity is obvious. We all know the journey is dangerous. Hundreds and hundreds of asylum seekers have died at sea. There is an estimated one-in-twenty chance that when you board an overloaded, leaky fishing boat from Indonesia in the hope of safety and a new life, you will never reach Australia.

This does not take into account deaths on other stages of the journey, such as on the Malaysia to Indonesia ferry leg. In these countries there is also the risk of being imprisoned, extorted and beaten in detention. Asylum seekers have died in Indonesian Immigration Detention. These are real risks and dangers.

Yet when you ask people who’ve actually made the choice to spend thousands for a place on a boat, they will often tell you that they thought the chance of dying was as high as fifty percent. I know one man who did the journey twice, twelve years apart. Even though on the first journey they nearly capsized numerous times and were without food and water for three days. When asked why he was willing to make the journey a second time, his answer was “What other choice did I have? It’s better to die once than living every day in my country knowing that you can be killed at any moment. It’s better than living every day in Indonesia or Malaysia knowing that you can be arrested, can’t work, have no future and just waiting for your money to run out. If it was just me, maybe I could live with these risks, but I have a wife and child. I have to find safety and security for them.”

When you understand these things you can see just how absurd it is to declare that people arriving by boat are anything but desperate. It’s inconceivable that anyone would spend thousands to risk their life on a boat if they could find any other way to travel. It’s inconceivable that anyone would choose to seek asylum in this way in preference to living safely under the protection of the UNHCR, waiting for resettlement. The people who get on boats do so because they don’t have any other realistic choice. It’s that simple. 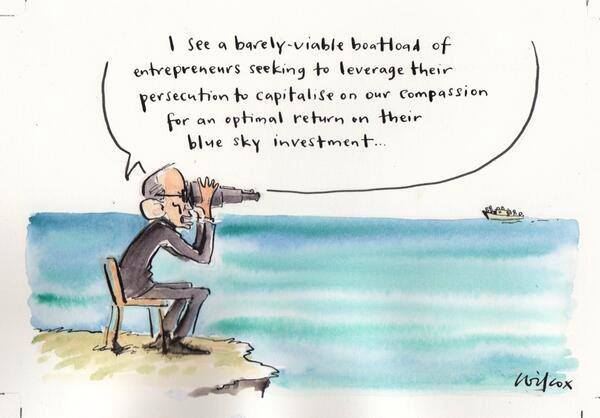