Safe, Effective and Legal: There is another way for Refugees Stop Abbott’s attacks on human rights: justice for refugees 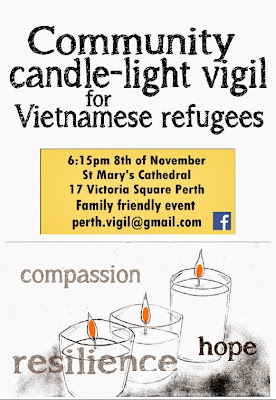 There are currently around 300 Catholic asylum seekers detained in the Yongah Hill Immigration Detention Centre just outside Northam, and hundreds more detained in detention centres throughout Australia. These people are fleeing religious persecution from the Vietnamese government predominantly in the town of Vinh.

These attacks include large groups of police, army, militiamen, and thugs who assault priests and the faithful.

Recently governmetn forces seized the chapel Con Cuong, desecrated the Eucharit Host, and smashed a statue of the Virgin Mary. Fleeing this ongoing persecution, hundreds of people have resorted to taking the perilous boat journey from Vietnam to Australia to seek asylum.

Of particular concern to refugee advocates is taht the Australian Department of Immigration are allowing a branch of the Vietnamese pollice to enter the detention centres and interrogate these asylum seekers. Following these interrogations, some have been so frightened that they have taken desperate measures such as selfharm, attempted suicide and escape. Additionally, families of the people interviewed, still in Vietnam, have faced increased persecution including harassment and arrest.

Another significant area of concern is that the Australian Department of Immigration is using the so-called “screening out” process to refuse large numbers of Vietnamese asylum seekers to enter teh refugee determination process. This means their claim for asylum will not be hear and that they will be deported to danger in Vietnam.

One of the basic tenets of the UN Refugee Convention is the protection of those who are persecuted for their religious beliefs. We hope to join with the Australian Catholic community to call upon our government to live up to its responsibilities. They must refuse to allow the persecutors of Vietnamese asylum seekers to interrogate them in Australian facilities. They must hear their claims for asylum and judge them on their merits.