A report by Kate Thresher

This year I became involved with the Refugee Rights Action Network. I have always been interested in this issue, however it was only this year that I met some people at the Murdoch University RRAN stall. I decided to do something so I started attending the weekly RRAN meetings and volunteered for the opportunity to begin visiting people detained in Yongah Hill Detention Centre. Through this I became active in organising the Community Candle Light Vigil to highlight the persecution of Vietnamese asylum seekers and Australia’s efforts to deny them protection.

I was also given the opportunity to go to the Canberra Convergence to protest for the humane treatment of asylum seekers. Participating in the convergence was a great experience and one I would like to share with all RRANers (both existing and prospective). The following is an account of my trip to Canberra.

Jet-lagged from the flight the day before, Tanya and I woke up at 6am on 18th November and walked down to Eddy St to catch the bus to Canberra. We were both in Sydney for the first time for the National Convergence against the inhumane treatment of asylum seekers by the Government. We boarded the bus and were surrounded by new faces and people of all different ages and backgrounds. After coming straight out of high school, and having the same arguments about asylum seekers with my peers time and time again, it was great to suddenly be surrounded by people who completely empathised with the desperate situation these people were in. The bus trip was also a great networking opportunity and gave us the chance to swap ideas and advice with people from all over the country.

When we got off the bus in Canberra the amazing gathering of people greatly overshadowed Parliament house. The Sydney bus joined to make up around 600 people from all over the country who had come for one reason; to protest for the human rights of asylum seekers who are denied a voice. Immediately a smile spread across my face as I looked around at the people standing there holding signs up proudly with slogans such as “No crime to seek asylum”. We joined the group with an unmistakable feeling of belonging that we were not isolated in this fight.

We then heard from speakers from all different backgrounds, including asylum seekers who had come here by boat, recounting the pain they had experienced in their countries of origin, such as Afghanistan and Sri Lanka. We also heard from people who had come here by boat about the appalling treatment they received once here. For example a man who came here at age 10 and was locked up in Nauru for 3 years.

Preachers, union leaders and community members followed this and expressed their solidarity with the refugee rights campaign. We also heard from Sarah Hanson-Young, the Greens Senator from South Australia, condemning the human rights violations committed by the current Coalition Government and the previous Labor Government. Hanson-Young slammed the arrogance and secrecy of current Immigration Minister for the Coalition, Scott Morrison. She continued on to inform us about her fight in parliament and the upcoming Senate vote to disallow temporary protection visas (which was successfully passed on 2nd December).

We then created a circle of solidarity around the large grassed area at the front of Parliament house. At 3:30pm, the two Sydney buses headed to the Papua New Guinea Embassy (PNG). We had been asked whether we wanted someone from Perth to talk and Victoria volunteered. She gave an impressive speech about the appalling conditions asylum seekers are met with on Manus Island, including exposure to conflict between the PNG police and military forces.

After this we headed back on our 3.5 hour journey to Sydney. At this point everyone was tired, however quiet conversations continued throughout the long journey back. I had the opportunity to sit next to a Hazara man; we chatted and he taught me some Hazaragi words. It struck me as such a beautiful thing that throughout all this chaos and cruelty there could be such a humane exchange between people from completely different backgrounds.

I had only joined RRAN in around July this year. For me this trip to Canberra was a fantastic experience as it gave me the chance to see a wider picture of the Refugee Rights campaign. It was an inspiring trip which has given me some great information on how to help build a successful refugee campaign and connections for future involvement in RRAN. I would like to thank RRAN for giving me this fantastic opportunity; it is one I have not taken lightly.

If you would like to learn how you can be involved in the campaign for the rights of refugees please get in contact with us. You can reach us on email info@rran.org, call or text us on 0417 904 329 or join us at one of our weekly meetings each Monday from 6.30pm at the Activist Centre (U15/5 Aberdeen Street, Perth. Just north of the McIver Train Station). 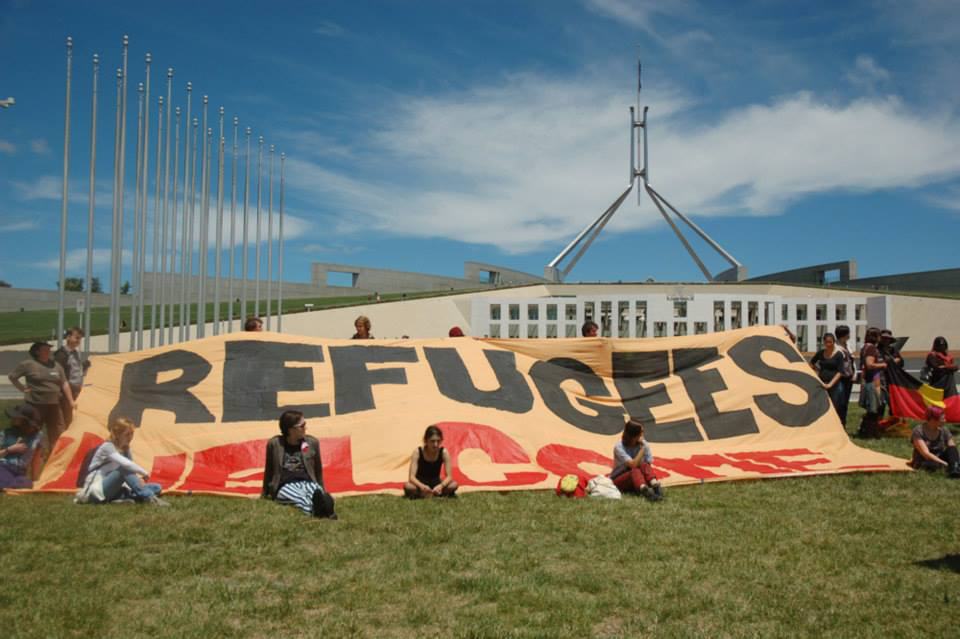