The regime for refugees who arrive by boat has been getting even worse since the Federal Election in 2013, if you can believe it.

The legislation that was passed in December 2014 by threatening to keep children in detention indefinitely has created a framework that is completely inconsistent with any aspiration to respect human rights, international law and common human compassion.

In spite of this bipartisan support for the basic policy framework  seems a solid as ever.  This includes,

This is only the tip of the iceberg of cruel, insidious and vindictive policies and practices that pervade refugee policy and law. Increasingly we are seeing that approach leech across into other areas of public policy.

If we are to see any change it is up to us to force that change.

It is up to us, we the ordinary people in the community who think that the lives and welfare of refugees, or anyone else, should not be subservient to the political interests of our political leaders.

Justice denied to one is a threat to justice for all.

Be a part of this growing community movement for justice for refugees. Join us on Palm Sunday and help create a better Australia that respects human rights, international conventions and rejects the sort of hateful and cruel politics on offer by both the major political parties. 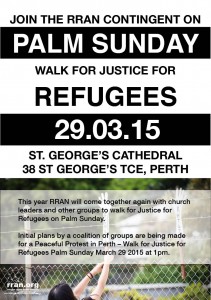