Palm Sunday -Walk for Justice for Refugees Urgent Protest (PERTH): Rescue the Rohingya- end the turning back of refugee boats

In solidarity with those in Yongah Hill who had been staging a roof top protest on Thursday and Friday the 19th and 20th of March some RRAN activists and other supporters traveled up to Yongah Hill to protest on the hill opposite the detention centre on the evening of Friday the 20th.

Our reasons for going were,

Hi All,
I just want to give a report on what was a very effective protest last night but also on the intense and crazy events which took place within the centre during the protest.

About 15 people in total held a small but passionate protest on the hill which overlooks Yongah Hill detention centre last ngiht to support the men who had spent Thursday night on the roof of one of the compounds protesting against the lenght of their detention and the conditions in which they are detained.

We arrived about 6pm  and the detention centre seemed pretty quiet; we couldn’t see anyone walking around or hear any noise. We received a message form a man detained within the centre who reported that Serco had ended the protest late afternoon.

One man voluntarily came down from the roof and was crash tackled by Serco officers, which had sparked other people in detention to argue with staff in his defence.

While all was quiet we started chanting ‘Freedom!’ and ‘Azadi!’ (freedom in Farsi), beeping our car horns and flashing our headlights to let the guys know we were there to support them. We then heard the guys start responding with whistles and chanting. Pretty quickly we saw some men climb onto the roof of the centre and the chanting became much louder.

We received an update from one of the men detained in the centre who explained that the protest had now spread across all compounds within the Yongah hill IDC and about 30 people were on the roof.

We saw the police drive into the centre. A couple of large vehicles arrived. We thought they may have been the portable cells the police use. However they could have also been carrying the AFP riot squad. We received another report from within the centre saying the Serco officers and other staff had left the compounds and only asylum seekers remained there. I assume this is the moment when the AFP riot squad entered the centre.

I should point out that at this point there was no riot taking place. This is how the detention regime and the police respond to lawful, peaceful protest by asylum seekers bringing attention to their suffering.

The protest continued for quite some time. We could clearly hear people chanting ‘Freedom!’ and we started chanting back and forth in response to each other. Apparently the centre refused to serve them food (it was dinner time) while the protest continued so people remained in their compounds rather than in the meal area.

Suddenly the chanting appeared to  stop and apart from the occasional voice we could not really hear people. Someone closer to the fence later reported that at that time a quick series of snapping/popping sounds could be heard which silenced the chanting. We suspect this was the sound of flash grenades or a similar device being released by the AFP into the compounds (these have commonly been used in previous detention centre protests).

We also received reports from within the centre that police dogs had been brought into the compounds. From the hill we could hear the dogs barking. It appears the police were walking form compound to compound intimidating people and picking off those people they believed to be ‘the ringleaders’ of the protest. We received a report that a number of the men had been removed from their compounds.

Later in the night we could see people running around the compound and hear more of the popping sounds from before. There was no loud chanting at this stage but clearly people were still protesting and running away from the police within the compounds. We tried taking photos but did not have a camera with strong enough to zoom for a clear shot. We continued making noise with our cars, continued chanting, and we raised the massive F.R.E.E.D.O.M letters on the hill which can be seen within the centre.

We received a final message form our contact within the centre thanking people for their support and explaining that the small demonstration of solidarity had been a huge lift to their spirits. They told everyone to drive home safely. About 10:30 we left feeling a mix of emotions. We were happy to have shown these guys that their protests are being heard within the community and we were glad that even though our protest on the hill was small it was a significant boost to the spirits of the people trapped inside the detention centre, so much so that they had the strength and the spark to expand their protest for a second night.

However, as always, we left feeling incredibly angry that people are subjected to this abuse and that we weren’t able to physically stand with the guys in the centre as they resisted the heavy-handed force of the AFP and Serco.

I look forward to the day when our movement is lagre enough and strong enough to step in and put an end to this nightmare. 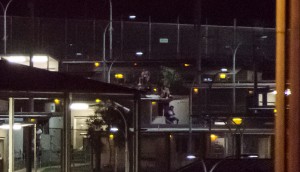