Tensions inside Darwin’s detention centres are growing. The were more reports of clashes inside DAL 1, the family compound of the Darwin Airport Lodge low security facilities this (Sunday) afternoon. The Refugee Action Coalition was told that ambulances had again been called to the compound.

Meanwhile in the main detention centre, NIDC, frustrations among long term asylum seekers are also growing. In particular, the frustrations are focused on the lack of progress with the granting of bridging visas, despite promises from the Immigration Minister. (Attached is a photo of an asylum seekers’ protest banner inside NIDC on New Year’s Eve.)

All the asylum seekers in NIDC have been interviewed for eligibility for bridging visas, but only two people have been granted visas from North 1 and South 2 compounds.

“The Minister’s statement and the interviews raised peoples’ expectations but those hopes have been dashed”, said Ian Rintoul, spokesperson for the Refugee action Coalition.

“One of the asylum seekers in NIDC told me that immigration case officers had told them in December that 50 people would be receiving bridging visas. But only two people waiting for security clearances had got the bridging visas”, said Rintoul.

“This is not fair”, RAC was told from inside the detention centre, “They are playing with us. People have been waiting for too long”. 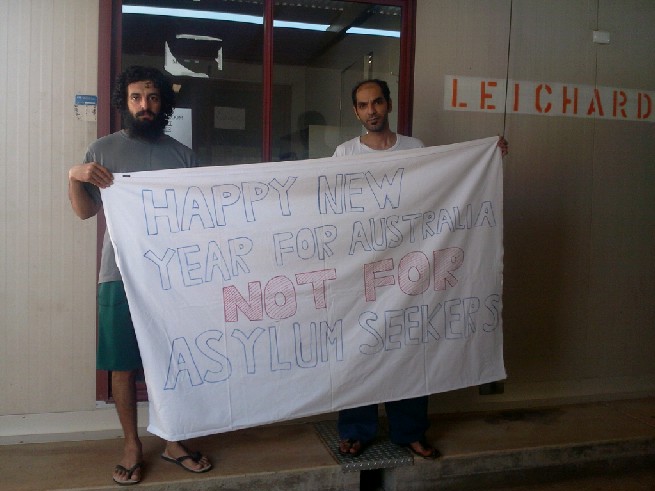 There are signs that the self-harm and suicide attempts that reached epidemic proportions in the NIDC during the second half of 2011 are on the rise again.

One of the Kurdish asylum seekers who sewed his lips together in a protest in November, has again attempted suicide by overdosing tablets on Friday morning. Although, he has now been returned to the detention centre, he is extremely unwell.

Since the opening of Wickham Point in December 2011, Darwin has become the detention capital of Australia and will be the focus of a national convergence of refugee protest groups at Easter this year.

“2012 marks the twentieth anniversary of mandatory detention”, said Rintoul, “and it is still taking a terrible toll on the physical and mental health of asylum seekers. The Minister said that up to 100 people a month would be getting bridging visas, but there’s no sign that the Minister is serious about that. In any case, it is a long way short of what is necessary. There are hundreds – stateless and Iranian asylum seekers and others waiting for ASIO security clearances — presently rotting in detention who should be released immediately.”