Over the Christmas period refugee advocates in DASSAN (Darwin Asylum Seeker Support Action Network) attempted to brighten the lives of children in detention by providing them with gifts from the broader community. These attempts were met with resistance and un-cooperation by Serco. Refugee advocates and organisation ‘Serco Watch’ posted a media release by DASSAN about the indicident. Ken V*****, a ‘Client Service Officer’ for Serco who works in Darwin, went onto the ‘Serco Watch’ website and commented:

“Sad for all the Christian kids! Not sure why Islamist* [sic] would want Christmas present.”

“Imprisoned??? I don’t know of any country in the world that you can enter illegally an be granted freedom immediately! No one abuses them, perhaps u forget the saying it takes two to tango. Maybe you need to come and face these men who teach their children that women have no rights. I guess you must think there is nothing wrong with domestic violence. And as for referring to them by id, that’s not true we still make an effort to say their names!”

The comments contain both religious assumptions and fallacies. They demonstrate a fundamental ignorance towards other cultures and their inherent diversity. For someone who is working with the most vulnerable people within society who originate from diverse backgrounds of different cultures and religions it would seem an obvious imperative to have a basic understanding of these cultures — or at least the common sense to not racially generalise them.

Some of the children in the centre are Christian and some are also Muslim (as distinct from ‘Islamic’ or ‘Islamist’), however Muslim children still desire presents for the exact same reason that any other child would desire a present. Especially because their childhood sadly consists of being imprisoned by the Australian government.

Referring to asylum seekers as ‘illegal’ is a further breach of the Serco contract. It is legal to cross borders and seek asylum when fleeing from persecution, as stated in the Refugee Convention.

V***** also denies the practice of referring to asylum seekers by ID instead of by name, something that has been condemned time and time again by the Human Rights Commission and many refugee advocate organisations.

Victoria Martin-Iverson from the Refugee Rights Action Network has stated:

“I absolutely and publicly question whether someone with these attitudes (which he has expressed in a public space) should be employed working with Muslim people. His comments display ignorance, and bigotry… There is nothing good natured in his comments. Instead there isa bizarrely callous attitude to the children entrusted to the care of Serco. The standard of that care, not for the first time, has been proven to violate the terms of their contract.”

She has since filed a written complaint and forwarded these comments to the Ombudsman & the Department of Immigration.
*: the Oxford English Dictionary defines an Islamist as an “Islamic militant or fundamentalist”, as distinct from a Muslim who is a “follower of the religion of Islam”. 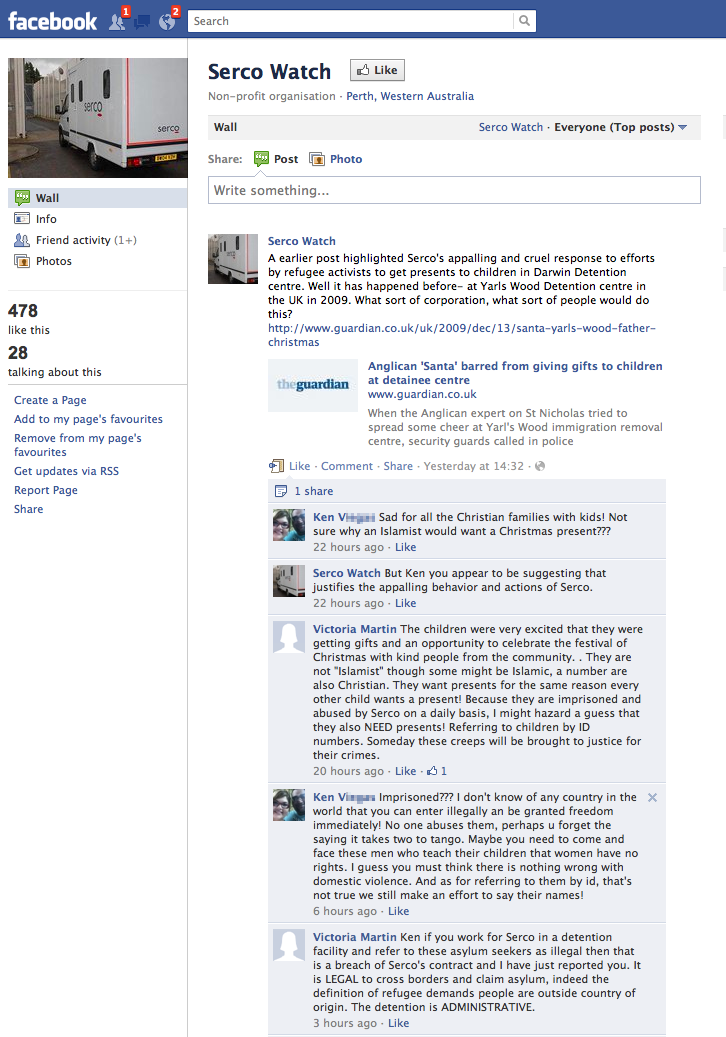