Latest from Nauru: “four asylum seekers they have made imaginary graves…” 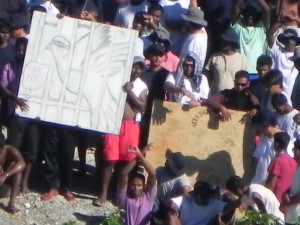 [RRAN has received this message from asylum seekers on Nauru]

TO WHOM IT MAY COMERN

The government and people of Australia.

25 more asylum seekers have been brought to the Nauru Hell from Darwin by force and fraud when they saw the worst condition of the detention centre they have also joined the hunger strike.

One another asylum seeker is suffering from the severe pain of tooth, from one week, instead of giving him treatment by the doctor; they called Nauru police, now he is out of order means, he naked himself in the whole camp.

We have seen four asylum seekers they have made imaginary graves for themselves because of losing their mental health.

Purpose of hunger strike is not to give us facilities here in Nauru Hell, we want to be shifted from this Hell Hole to Australia and our cases should be started immediately.

In this modern period no body wana keep a domestic animal in tent at a temperature of 42 Celsius for a day but unfortunately human being are living in Nauru Hell is such worst conditions.

In short period we have seen asylum attempted suiciding, self-harming, mentally disturbed, stressed, naked themselves, protests and hunger strikes. So what will be result in the future?

We request to the government and people of Australia save our lives and future.