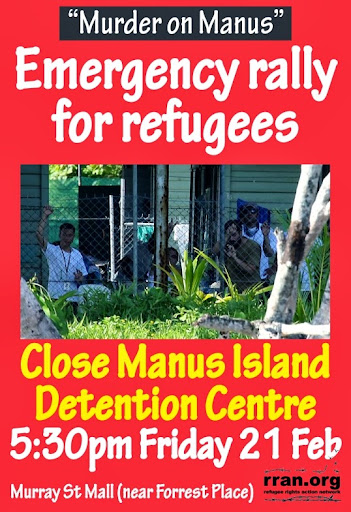 [The following account has been put together and released late on February 18, 2014 from multiple sources that various Refugee Rights Action Network activists have complied after collating a multitude of communications our activists have received over the last few days directly from asylum seekers and staff based on the island. This contests many of the claims by the Australian government.]

Asylum seekers have been staging peaceful protests at least twice daily for over two weeks at the centre. Protests turned violent starting on Sunday the 16th of February. The asylum seekers had a meeting at 2 o’clock in the afternoon with Australian Immigration, PNG Government, The Salvation Army & G4S staff.

Several asylum seekers have reported that a pack of dogs were used as security during the meeting. Although it is not uncommon to use dogs as security in the Pacific, they have especially strong connotations of control and hostility for people from the Middle East.

The meeting was meant to answer questions about their visa processing, and questions raised at a previous meeting on the 5th of February. Asylum seekers had demanded a substantive response to their questions.

There was significant ambiguity in answering questions and strong implications that processing hadn’t started, nor any clear answers about resettlement.

The asylum seekers revealed that they discussed the results of the meeting within their respective communities in the internment camp & decided to start a peaceful protest at around 6pm that night. As near as can be determined, all the different ethnic groups were in agreement on a protest that evening.

The PNG locals – both staff working in the center and people living in the vicinity of the camp – started to throw stones over the fence into Mike, Foxtrot and Oscar compounds.

Some of the asylum seekers in Oscar compound escaped through a hole in the fence between Oscar and Mike compounds and went into the jungle. 8 of them were arrested and beaten by the local people before being taken to IHMS (the medical service providers). Two asylum seekers were transferred to Lorengau hospital later in the night.

Following this, the “PNG Special Forces” became involved and the asylum seekers from Foxtrot compound in Mike were forced back into Foxtrot and everything was calm again until 8pm.

At 8pm, the local PNG G4S and other locals attacked Oscar and Mike compounds. They entered Oscar compound and started beating asylum seekers with what has been described as by the asylum seekers as ‘’swords and bats,” which other sources have called “hunting knives.” Around 15 people were wounded at this time. They received wounds in the forms of cuts to their neck, shoulders, thighs, back and head. They were taken to IHMS for treatment of their wounds.

The locals couldn’t enter Mike compound, so they started throwing stones at asylum seekers from 3 sides of the fence. At least 4 people were hit on their head, shoulders and feet by stones. It was reported to RRAN that these locals even managed to hit and injure an Australian G4S officer with a stone thrown over the fence. The asylum seekers had no stones inside the centre to retaliate with. They were stuck inside the compound whilst being attacked.

It was reported by staff in the centre and asylum seekers that the guards had been inside the compounds over the previous week and had cleared out all the stones and all objects that could be used as projectiles.

RRAN also heard reports that staff had moved beds into a central location prior to the conflict, which is where asylum seekers were later treated.

The guys in Foxtrot compound again wanted to go to Mike compound to assist those injured in that compound, but special forces interfered and forced them back.

In Mike compound, the locals and PNG G4S staff weren’t allowed back into the centre or the compounds. The asylum seekers began to clean the compounds and reported that they “were even running the internet and phones.”

The asylum seekers report that staff placed ‘’containers’’ or ‘’iron boxes’’ at the gates “so no one can escape.’’

The following day, Monday the 17th, it was again reported that there were no staff inside the centre. It appears as though all Australian staff were evacuated to a ‘safe” area (Australian Navy vessels). The asylum seekers left to fend for themselves. This is a similar scenario to that reported in October when the local Police Special Forces Unit (locally known as the “mobile squad” or “death squad”) and PNG military personnel stationed on the island engaged in a pitched battle outside the perimeter fence of the internment camp with rifles, semi-automatic guns, swords, hunting knives and rocks.

The locals are reported as ‘’breaching’’ the fence in Mike compound and the asylum seekers all ran into Foxtrot compound. The locals turned off the power and raided the compounds attacking all clients.

They pulled them out of bed and pulled them from under beds. They found people hiding in cupboards. The asylum seekers in Foxtrot compound were hiding under the containers and were then dragged out and beaten.

3 people were shot but are still alive. Australian workers on the island report that people had serious injuries such as broken legs, arms, stab wounds and wounds to the head from rocks. Advocates heard gunshots ringing in the background of phone calls with asylum seekers on Monday.

Asylum seekers reported that the local used white weapons and bush knives. Unconfirmed reports stated that at this time G4S guards were holding two Iranian asylum seekers in a headlock position whilst simultaneously holding knives. At some point, the asylum seekers started “bleeding profusely” from the neck. There has been no suggestion that G4S intentionally wounded the asylum seekers, although that was certainly the result.

One supervisor tried to help the asylum seekers escape the locals by allowing them to re-enter the compound through a side gate. He then became subjected to the attack by having stones thrown at him. The people inside Oscar tried to defend him by throwing stones back at the locals, but were also surging the gate to escape together. Police then intervened.

One asylum seeker is dead from a head wound after being struck by a rock.