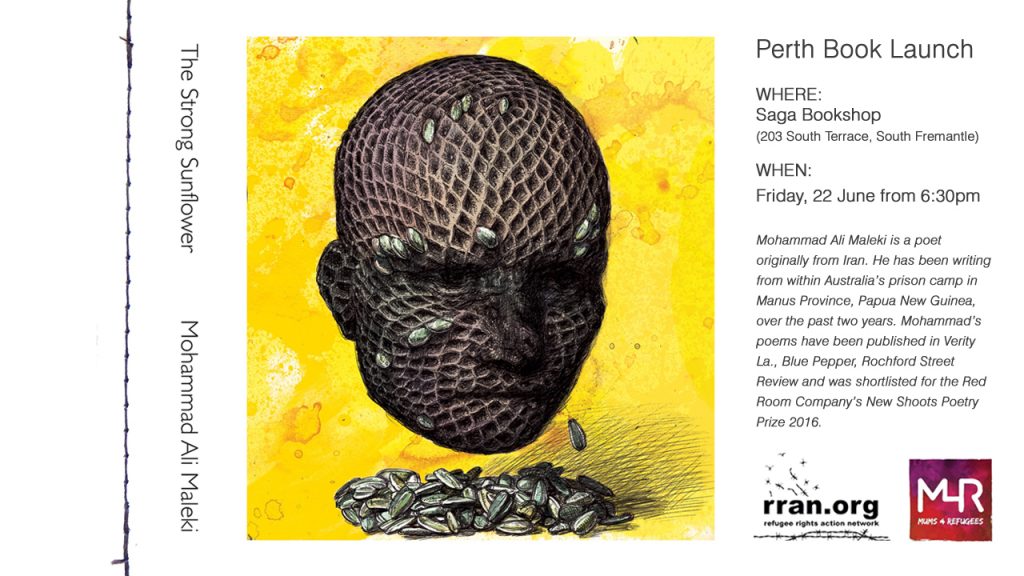 Mohammad Ali Maleki is a poet originally from Iran. He has been writing from within Australia’s prison camp in Manus Province, Papua New Guinea, over the past two years. Mansour Shoshtari, also exiled to Manus, works closely with Mohammad to translate his work from Farsi to English. Mohammad’s poems have been published in Verity La., Blue Pepper, Rochford Street Review and was shortlisted for the Red Room Company’s New Shoots Poetry Prize 2016. His poems were performed in Writing Through Fences’ bilingual show Through The Moon at the 2017 Queensland Poetry Festival. A chapbook of his work titled Truth in the Cage (ed. Michelle Seminara), is to be released later in 2018.

Mohammad previously worked as a tailor and film/theatre set builder. In Manus prison he built a garden and much of his writing has grown with the life-sustaining practice of gardening. The Strong Sunflower was one of the first pieces that Mohammad wrote. It was sent to Rose Ertler, and visual artists were invited to respond to Mohammad’s poem.

Refugee Rights Action Network are hosting the Perth launch of ‘The Strong Sunflower’ (published by Writing Through Fences) with the generous support of Saga Bookshop and Mums 4 Refugees.

Mohammad Ali Maleki remains exiled on Manus and as a result of government policies is unable to be present at the launch. Instead, we will be facilitating a reverse-signing of his book to send to him so that he knows the Perth/Freo community are celebrating this achievement with him.

The venue is kid friendly (toys available for little ones) and wheelchair accessible. Light refreshments will be served. All are welcome.