Help Support RRAN Protest Geert Wilders in Perth: No to racism, no to Islamophobia

The People Smuggler: An evening with Robin de Crespigny 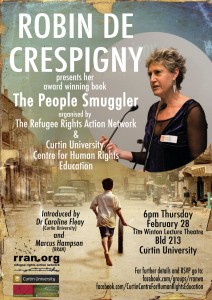 The Curtin University Centre for Human Rights Education and the Refugee Rights Action Network invite you to an evening with awarded author Robin de Crespigny.

With an introduction by Dr Caroline Fleay (Curtin University) and Marcus Hampson (RRAN), Robin will present her award winning book, The People Smuggler, and will talk about the researching and writing of this extraordinary story.

There will be opportunities for people to ask questions, meet the author and have a copy of the book signed by her. Books will be available for purchase on the night.

The People Smuggler tells the true story of Ali Al Jenabi who, after fleeing Saddam Hussein’s torture chambers, is forced to leave his family behind in Iraq. What follows is an incredible international odyssey through the shadow world of fake passports, crowded camps and illegal border crossings, living every day with excruciating uncertainty about what the next will bring.

Robin won the 25th Human Rights Award for Literature in 2012 and The People Smuggler has also won the Queensland Literary Award and was one of three finalists for the Walkley Book Award. It has also been short-listed for the Waverly Library Award for Best Literature.